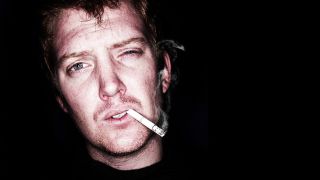 Josh Homme is one of rock’s high achievers. A founding member of stoner rock pioneers Kyuss, he still fronts his long-time band Queens Of The Stone Age, and was a member of A-list supergroup Them Crooked Vultures, in which he starred alongside Dave Grohl and John Paul Jones. He has also put together the loose Desert Sessions collective, worked as a producer, and founded Eagles Of Death Metal.

You’re always a very busy man, Josh. What are you doing right now?

I’m in… shit, Atlanta? Queens Of The Stone Age are touring the States, playing our first record from 1998. I once saw Cheap Trick do their first three records three nights in a row and it was fucking awesome! For us it’s this little moment of hovering over the camp-fire of that first record, which is kinda cool.

What do you think of your old bandmates reuniting for the Kyuss Lives tour?

It’s great. They’re keep the music alive, and all those shows sold out right away. Kyuss fans are so – to use a California word – gnarly.

You’ve described yourself as a conservative. Do you mean politically?

Sure. I’m very socially liberal, but I don’t think the government knows what to do with your money better than you do. If the government were a business it would be completely bankrupt. And they always put new laws on the books but they never take any away. I wish they’d just get off my fucking lawn, basically.

Are you thinking of joining the Tea Party, like Sarah Palin?

I think I’m even worse than that. I’m a fallen libertarian. In America, the land of the free, almost every civil liberty has been taken away; people use the police for everything. If you have some disagreement with your neighbour, they call the police, a third party, to mediate. And you basically give away control to a little Judge Judy. I don’t believe in that. I don’t like… I guess you’d have to say The Man, for want of a better word.

What else pisses you off?

I can’t stand the modern schooling system. If you learn a little bit of everything you’re a Renaissance man? No. You can play Trivial Pursuit and that’s about all.

How has fatherhood changed you?

Not at all. Pepper Keenan [of Corrosion Of Conformity and Down] said to me: “It’s the rock’n’roll curse, man – you have a daughter, it’s payback time.” But really, it’s the best thing ever. If I can teach my daughter that she doesn’t have to be an object to be worth it, if I can teach her to love to learn so that she can really excel at whatever it is she loves, then I’d be happy.

What’s the best advice you ever been given?

My grandpa used to say: “If you’re gonna be different you’re gonna get hit with rocks, so you need to learn to like rocks.”

Have you ever had a drug problem?

It’s never really been a problem. I’ve always been able to get ’em. Before we released Feel Good Hit Of The Summer [from QOTSA’s Rated R album], I sensed that I was heating up a brand to push on to my skin. But that song truly wasn’t an endorsement, even though people immediately said: “Oh yes it is!” It was manipulative and funny. I don’t take myself too seriously but I take the music seriously, and that was a perfect melding of both, for me.

When you fired Nick Oliveri from Queens, was that one of the most difficult decisions you’ve had to make?

What happened between Nick and I had nothing to do with music. I told the truth, and it was so hard to say out loud that it spiralled me out of control for a good eight months afterwards. I didn’t want to say what had happened because I felt like it would crush Nick’s reputation. But instead it made me look like an egomaniac freak. Nick kinda played on that and it hurt my feelings, so I finally said what happened. And when I did I felt terrible, because that’s not what you should be doing to your friend.

Do you own a gun?

Yeah. I own six guns. I have a classic Winchester repeater rifle, like the old cowboys had, I have a sawn-off shotgun, and a Berretta 9mm target pistol that’s amazing.

Which would you reach for if you found an intruder on your property?

I probably wouldn’t go for a gun. They say if you don’t pull a gun you won’t get shot. Generally. I’m from the desert and I was raised around guns – raised to respect them.

Absolutely. But not a man with a snow-white beard. I think we have a symbiotic relationship with the entire world, and I believe God is everything you don’t understand.

Why are we here?

To me, the answer is it doesn’t matter – you’re here. I don’t try to comprehend what you can’t comprehend.

Family. I’ve always felt that way. There have been moments when I’ve fancied myself a pirate, and I was lost at sea. But I’ve never found, in all my pirating escapades, anything more important than the relationships with your family