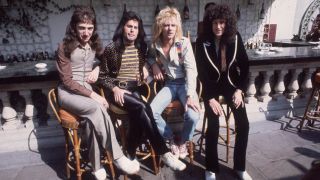 Queen are launching their own beer to celebrity the 40th anniversary of smash hit Bohemian Rhapsody.

Bohemian Lager is described as “golden and hoppy”and will be made in the Czech Republic. The 4.7%ABV brew follows the release of the band’s Killer Queen Vodka – which launched in honour of late frontman Freddie Mercury’s favourite tipple.

Bohemian Lager will be available in Europe later in the summer ahead of a planned worldwide release. A 12-pack of bottles will cost £20. They’ll feature an image from A Night at the Opera, the album on which Bohemian Rhapsody appeared. They’ll also include the distinctive Queen crest, which was designed by Mercury while he was a student at Ealing Art College.

Bohemian Rhapsody spent nine weeks at the top of the UK singles chart when it was released in 1975.

Queen have toured with American Idol star Adam Lambert recently. In March, Bohemian Rhapsody was named the UK’s favourite no.1 hit of the 1970s.

Iron Maiden, Behemoth and Pulled Apart By Horses are among the other acts to launch their own beers.