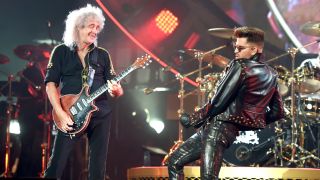 Brian May says Adam Lambert has "woken up" Queen and hinted that their working relationship could continue beyond the current world tour.

Former American Idol contestant Lambert is out on the road with May and Roger Taylor and has won praise for the way he has filled in for the late Freddie Mercury.

May tells Eddie Trunk: “I think he’s woken us up — and just in time. There’s a big call to do more shows now. So, there’s a good possibility that we will do more shows. I think, beyond that, we’ll just see.”

When Mercury died in 1991, May harboured no ambition to ever perform as Queen again. But with Lambert proving an able frontman, he feels it’s right that the music is given centre stage again.

He adds: “It’s a great place to be. I feel so fortunate to be going out there. I never thought it would happen again. When Freddie went, I thought ‘That’s it. We did that. It was a great life. Now, it’s time to have a different life.’

“And for years, we didn’t try to be Queen in any way. I would look at the Forum in LA, and I would look at Madison Square Garden, and I would think ‘Those were the days.’ To come back now, all of these years later, and to fill those places and to hear that noise. That’s vindication for the fact that we should be playing, we should be out there. I feel overcome with it, really.”

Queen recently announced an archive album called Queen Forever, which will be produced by William Orbit and feature the vocals of Mercury. It is due out before Christmas.