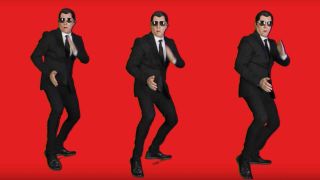 The hypnotic but scabrous five-minute track features Keenan and co-vocalist Carina Round trading lines about the ignorant  sleepwalking into doom.

The surreal video sees Maynard in black suit and lipstick cutting some rug against vivid red and green backgrounds, while cameras pan through empty cities.

A video posted the band’s Instagram featured a brief snippet of what appeared to be new music, accompanied by the words: “Doin Stuff. More details to follow this weekend."

A second video teased more of the same music, with what looks like a spinning album sleeve and the words "Round 2 of The Teasing."

Both posts were accompanied by the hastags #puscifer2020 and #soon.

Puscifer reportedly finished recording the follow-up to 2015's Money Shot earlier this year, originally with plans to release it in 2021. But with Keenan’s touring commitments with Tool temporarily curtailed by the COVID-19 panic, it could mean the album has been brought forward.