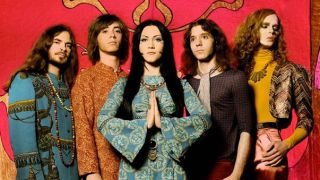 Purson have confirmed the launch of an EP entitled In The Meantime on November 3.

The four-track title comes ahead of their second full-length album, expected in early 2015. Hear lead track Danse Macabre below.

The band were nominated in this year’s Progressive Music Awards and are also up for the Best New Band gong at the Classic Rock Roll Of Honour, with voting still open.

Their debut album The Circle And The Blue Door was described as “an exploration of the recesses of reality, set to a soundtrack of the three Bs – the Beatles, Bowie and Black Sabbath, creating a marriage of dream and nightmare, a sonorous and idyllic tour of the psyche, that threatens to turn into a bad trip at any point.”

Frontwoman Rosalie Cunningham recently said: “Psychedelia definitely seems to be having some sort of day again – but the word is being thrown around a little too much for my liking.”

The band are currently touring the UK, with the following dates remaining:

In The Meantime tracklist