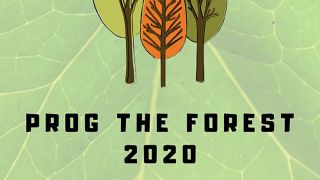 The online version of this year's Prog The Forest takes place this afternoon. You can join in the fun via the Watch2Gether website from 2pm today. All the acts who were due to play live at this year's event will be involved, where the organisers will still be raising money for The Woodland Trust.

"We’re not trying to emulate the actual festival, we’re just doing a two to three hour livestream of previously recorded material, with a few (prerecorded) links from Malcolm, Kathryn and myself," says organiser Chris Parkin. "Hopefully there will be some live text chat from the viewers on the site as it plays. In order to make it a little more easily digestible, we’re mixing it up with (mostly) individual tracks rather than emulating full sets, interspersed with headshot messages, etc... Emperor Norton are the exception, where we’re including a full 36-minute set from last year’s Fusion."

The event raises money for the World Land Trust, who are helping restore forests that have been lost to deforestation. Donations can be made here.

Like many venues around the country, The Fiddler's Elbow is battling for its own survival owing to no rental relief from landlords. The venue has launched a crowdfunding  campaign which you can read more about here.