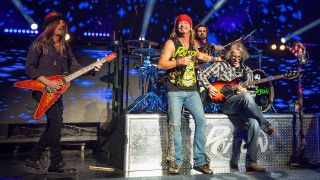 Poison have added a countdown clock to their website, suggesting some big news is on the way.

The clock will reach zero tomorrow (December 4) and the announcement could very well be the much speculated tour with Motley Crue and Def Leppard.

Rumours of live shows started to appear just over two weeks ago, with it suggested that the three bands will tour across North America together next summer.

Shortly after the rumours began to circulate, Motley Crue announced their intentions to tour again by destroying their famous cessation of touring contract they signed in 2014, prior to their 'final' tour.

Poison, meanwhile, haven’t toured together since the summer of 2018, when they headed out on the road across North America on the Nothin’ But A Good Time tour.

Speaking last year, bassist Bobby Dall revealed he would like to record a new album with his Poison bandmates, but admitted it might be “difficult” finding the time to do so. The band haven’t released a record since 2007’s Poison’d.

He told the OC Weekly: “I personally think we still have a lot of stories to tell. Because the music business has changed so much, I don’t know that you’d get a full record out of Poison, but I do believe that you will see new music at some point in some capacity.”

All will be revealed tomorrow.