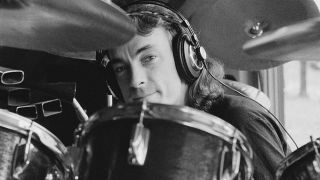 A petition to have a statue or plaque dedicated to Rush’s Neil Peart placed at Lakeside Park in St. Catharines, Canada, has gathered more than 20,000 signatures.

The location was made famous thanks to Rush’s classic Caress Of Steel track in 1975 – and according to St. Catharines newspaper The Standard, Peart’s family are “fully on board” with the idea.

The petition was started by Tony McLaughlin and addressed to city mayor Walter Sendzik and St. Catharines’ residents.

In a statement McLaughlin says: “Speaking on behalf of myself and many others in the community of St. Catharines, we would like to see some sort of plaque or statue to commemorate the drummer of Rush, Neil Peart, in Lakeside Park.

“Neil spent a lot of his youth in Port Dalhousie as can be heard in the famous song he penned Lakeside Park. What an amazing tribute it would be to him to have this placed there.

“We're all very proud of his accomplishments after he made that fateful audition in Toronto back in the 70s. If we all pull together, we can make this happen.

“With his untimely passing recently, this needs to be done even more so now. Please sign the petition, and let's all make some change. Thank you.”

Peart’s nephew Jason Howe told The Standard that his family are behind the move, adding: "They think it's a great honour.”

In September 2016, Rush were awarded the keys to the city of Toronto at the opening of the Lee-Lifeson Art Park in the Willowdale neighbourhood in the city.

Peart’s death was announced on January 10, with a statement from the band saying the 67-year-old died on January 7 after a three and a half year battle with brain cancer.

At the weekend, Peart’s Rush bandmates Geddy Lee and Alex Lifeson thanked family, friends, musicians, writers and fans for their messages, saying: “These touching tributes help to lessen the pain of this terrible loss and remind us all to celebrate his remarkable life and our connections to it.”