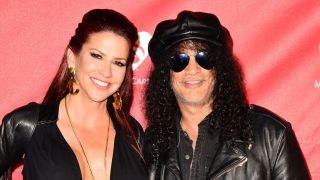 Slash’s estranged wife Perla Hudson says her split with the guitar icon is “amicable” and that she gets on with his new partner.

Slash – aka Saul Hudson – filed for divorce from his wife of 13 years in December, saying they had separated in June of last year.

Perla Hudson tells TMZ that she still speaks to Slash and that there is no bad blood and doesn’t expect the lack of a prenuptial agreement to be a problem.

Former Guns N’ Roses man Slash is reported to be dating Meegan Hodges, and the pair recently got matching tattoos.

Perla adds: “They can do whatever the hell they wanna do. Whatever. I like her. I think she’s a nice woman. Everything’s really cool and amicable.

“We had a really long, lasting, loving relationship for a long time. We’re best friends, we’re business partners, and we just wanna do what’s best for our kids.”