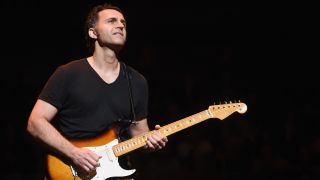 Dweezil Zappa says the Zappa Family Trust is planning to trademark the name Zappa – effectively banning him from performing under his own name.

Dweezil – the son of the late Frank Zappa – has been involved in a long-running dispute with the Zappa Family Trust (ZFT) over trademarks and music licensing surrounding his performances of his father’s music.

His live show was originally called Zappa Plays Zappa, but he had to change it to Dweezil Zappa Plays Frank Zappa when the ZFT objected.

Further intervention by the ZFT saw him perform under the banners of Dweezil Zappa Plays Whatever The Fuck He Wants and Dweezil Zappa: Cease And Desist.

Now he claims the ZFT want to stop him using the name Zappa altogether and he has asked fans to contribute to a crowdfunding campaign to help him fund a legal battle over the rights.

Dweezil also claims the ZFT want to use his father’s name to market branded “beer, wine and yoga pants.”

Addressing the audience at an October 28 show at The Warehouse in Fairfield, Connecticut, Dweezil says: “Now they are very intent to do something that is probably the most ridiculous thing ever. They have actually filed for a federal trademark for the surname Zappa on it’s own, so that they can prevent me from using it for live concert entertainment or personal appearances, effectively making me only be allowed to exist as ‘Dweezil’.

“So, clearly I must fight this, and this is where you can activate yourselves, and maybe decide to help with this cause.

“Next month, there’s a hearing, in which we hope to be victorious, and I am going to start a crowdfunding campaign to help fight this, and I’m going to make an announcement about it in about a week, so I hope that you will consider helping with this ridiculous issue because for me this is a labour of love.

He continues: “Oh I know, there is a reason that they don’t, because they have decided that the name Zappa should be just a brand, like Gucci.

“This is like a systematic dismantling of Frank Zappa’s integrity and his life’s work in my opinion.”

All four of Zappa’s children are beneficiaries of the Zappa Family Trust. Following the death of their mother Gail last year – who managed Zappa’s musical legacy since his death in 1993 – Ahmet and Diva were left in charge of the organisation as its trustees.

Their threatened legal action has fuelled tension with their siblings, Dweezil and Moon.

The trust claims that they own the Zappa name, and that Dweezil risked copyright infringement damages of $150,000 each time he played a song without proper permission.