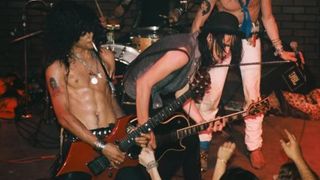 Slash playing the BC Rich Warlock with Guns N' Roses

A guitar played by Slash during the early days of Guns N’ Roses is expected to fetch up to $80,000 at auction.

The metallic red BC Rich Warlock guitar goes under the hammer at Julien’s Auctions in Los Angeles on November 5. Slash bought the guitar in 1984 from the Hollywood Music Store in West Hollywood and used it live for the first time at Madame Wong’s West in Santa Monica, California, on June 16 of that year where he performed with pre-GNR group Hollywood Rose alongside Alx Rose and Steven Adler.

He later used it during the first ever Guns N’ Roses show with the classic line up of Rose, Adler, Izzy Stradlin and Duff McKagan at the Troubadour in West Hollywood on June 6, 1985.

Slash has signed the body of the guitar and also drawn his signature skull and crossbones logo and written “R&Fn R.” It comes with a letter of authenticity also signed by Slash.

It was used to write classic GNR hits Welcome To The Jungle and Sweet Child Of Mine. The Warlock can be heard on the band’s independent EP Live?!*@ Like a Suicide and 1988 release Lies.

The Warlock was last played in January of 1987 by Slash and stored away in its custom Anvil guitar case ever since. It was acquired from the collection of former GNR roadie Jason Solon.

Julien’s Auctions say: “It has never been displayed publicly but is well documented through many photographs from that time period as well as many articles and biographies discussing its importance in Slash’s career and Guns N’ Roses’ formation. Its whereabouts had remained a mystery for the last 30 years until now, which has only added another dimension to its folklore. This is truly an iconic museum quality piece of rock’n’roll history.”

Slash this year reunited with Axl Rose in GNR, who are on the road on their Not In This Lifetime tour.

Thinking Out Loud: Slash on school, fame and weird phobias