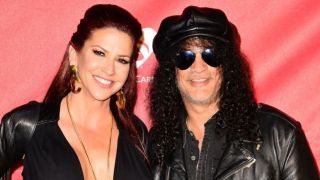 Slash claims he and Perla Ferrar were never legally married – and she has no right to a share of his vast wealth following their divorce in 2014.

The Guns N’ Roses guitarist, who wed Ferrar in 2001, says they discovered she was still married to previous partner Carlos Marty when they later applied for dual citizenship for their son, Cash. The forms for a final judgement were reportedly not filed properly, according to TMZ.

Perla, who previously insisted their split was “amicable” says they’d hired a lawyer in 2009 to finalise the divorce, and got a judge make it retroactive to 1994. Her case could also be upheld under a law for “putative spouses”, which means if people have a reasonable belief they are married, a judge can decide to legally divide their assets.

Slash filed for divorce from his wife for the first time in 2010 – but withdrew the case after they worked things out two months later.

Slash is currently on the road with Guns N’ Roses on their Not In This Lifetime tour.

Meanwhile, a guitar played by Slash during the early days of Guns N’ Roses is expected to fetch up to $80,000 at auction next month.

The confessions of Slash: “The strangest thing a fan ever gave me? Crabs!"