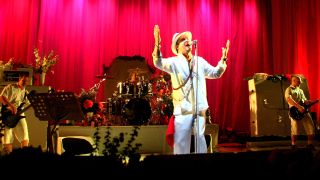 Faith No More have hinted that they could be about to start work on new material.

A tweet on the band’s brand new, official Twitter account seems to suggest something is on the horizon and has sparked a flurry of excitement among fans.

The account’s first ever tweet reads: “Hey! Stay tuned for more Tweets from Twats!!! The reunion thing was fun, but now it’s time to get a little creative.”

It was accompanied with a black and white selfie of frontman Mike Patton.

Faith No More reformed in 2009 after an 11-year hiatus, but Patton has previously strongly suggested that new material was not part of the plan.

Faith No More’s last record was 1997’s Album Of The Year.