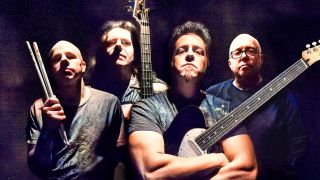 "RoSfest has a great history and reputation so we're all excited to be playing there in 2020, especially since it's the first gig we've lined up," John Boegehold tells Prog.

The band have also released a drum-through video of the track No Land's Man featuring Jimmy Keegan, which can be seen in full below. The original can be found on the band's self-titled debut album, which was released through InsideOut Music earlier this year.