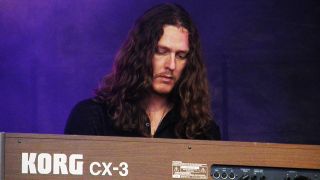 Ozzy Osbourne is planning to start work on a solo album once he’s taken a break at the end of Black Sabbath’s final tour, says keyboardist Adam Wakeman.

And although the son of prog icon Rick isn’t certain whether he’ll be invited to return to take part, he’s ready to do so.

He’s also a touring member of Black Sabbath, years after his father collaborated with the band.

Wakeman Junior tells EonMusic: “I was lucky enough to start with them in 2003, so this is my 13th year with Ozzy and Sabbath. I keep half-expecting a picture of a Spitfire and a watch at the end of each tour – but they keep asking me back and I’m happy to come.

He continues: “It’s great to be involved in the studio stuff as well as the live stuff. I don’t know for the next one – who knows? But one of the great things about Ozzy is he reinvents himself and he works with different producers and musicians.

“He’s very happy with his band so hopefully that will continue. I’m there whenever he needs me.”

Wakeman recalls a fond moment during the recording of Ozzy’s last solo album, Scream, released in 2010. “Ozzy brought in this keyboard and said, ‘The last person who played this was your old man in 1975.’

“It still had the Black Sabbath sticker on the back of it. I was like, ‘I’ve got to use this on the record,’ so we got it all wired up – and it was broken.

“We could get some noise out of it, but no notes. So we made this sound effect thing and it does sneak in somewhere on the Scream record. It’s great to know that the last time it was used was on a Sabbath album by my old man.”

Ozzy is being sued by former bassist Bob Daisley over royalties related to his first two post-Sabbath albums. Wife and manager Sharon Osbourne said in May that the vocalist would retire in the next few years, adding: “I don’t want Ozzy singing Crazy Train at 75. I think it’s best you go out before you hit 70, and go out on top.”

Ozzy Osbourne: why I can't stop working, TV stardom, and being crap at parking