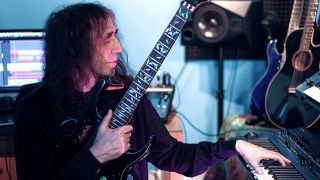 Ozric Tentacles have revealed that their new studio album Space For The Earth will be released on October 9 through Kscope.

The record will be their first since 2015’s Technicians Of The Sacred and will feature the single Humboldt Currant which debuted last month.

Space For The Earth was written, programmed, recorded and produced throughout 2019 and into 2020 by Ed Wynne at Blue Bubble Studios and is said to be inspired by the Scottish hills, valleys and beaches surrounding the studio.

Wynne, who released his solo album Shimmer Into Nature in 2019, is joined on Space For The Earth by Ozrics synth player Silas Neptune and drummer Balázs Szende.

Speaking about Humboldt Currant, Wynne said: “It’s a light-hearted message about feeling all right. It's not trying to dig down into the depths of what is going wrong in the world but giving people a little bit of relief from everyday life – a stepping-stone into the astral plane.”

The album artwork was directly inspired the the album’s seven tracks and created by arboreal artist Kitty (Twisty-Trees) with help from Wynne and cosmic artist Ivy.

Space For The Earth is now available to pre-order.