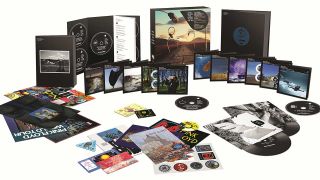 Pink Floyd’s epic The Later Years 16-disc box set came out in December, and Amazon have just slashed the price for a third time.

The expansive set, which features remixed studio albums and live recordings along with a host of extras and collectibles, was originally going to set you back £429, but Amazon lopped over 100 quid off the asking price briefly in November before raising it again to £320.

Now they've reduced the price to its lowest yet, and now it's selling for just £271.49 if you order today.

We don't know where the price will go from here, but if you're in the market for The Later Years you won't currently find it cheaper anywhere else.

Order Pink Floyd The Later Years for £271.49 (was £429)
Immerse yourself in hours of audio visual delights, focusing on Pink Floyd's work from 1987 onwards. The set includes loads of rarities and collectibles too, offering loads for fans to explore.View Deal

Pink Floyd: The Later Years consists of 5 CDs, 6 Blu-rays and 5 DVDs. Here’s a recap of the details:

DVD: Five DVDs duplicating the content of Blu-rays 2-6 above, each contained in a gatefold wallet with dedicated cover art, including tracklists and publishing credits.

A collection of memorabilia including tour passes, stickers and posters, all printed to replicate the originals, and contained in a prestige card envelope.