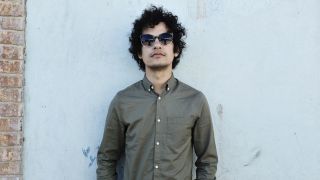 The At The Drive-In and Mars Volta man recorded them between 2008-2013 and the collection will be issued by Ipecac Recordings on a bi-weekly basis, starting with the July 15 launch of Sworn Virgins.

Each album will be available on digital formats and CD, while a limited edition CD/LP box set will be announced in the near future.

Ipecac co-owner Greg Werckman says: “We had all admired Omar’s work from afar and then recently got to know him up close. It was so great to find out that as talented as he is, he is an even better human being and we love having him as part of the Ipecac family.”

Rodriguez-Lopez adds: “It’s crucial in this day and age to be able to surround yourself with like minded people that you can share an ethos with.

“I feel grateful and fortunate enough to have found this with such amazing people: Mike, Greg, Shawn, Marc and the Ipecac family. After throwing around many different project ideas, this seemed like the best place to actually begin, on what will surely be a long-lasting collaboration.

“I can’t think of a better home for these records or of another label crazy enough to put out this much material. The series also owes its blood to the hard work and talents of Jon Debaun and Chris Common, who diligently scoured through endless hard drives to find these albums and provide such stellar mixes.”

Full tracklists for all 12 albums will be made available in due course, while the full release schedule can be found below.

Last month, At The Drive-In were forced to cancel the remaining dates on their North American tour when singer Cedric Bixler-Zavala lost his voice due to illness.

ATDI parted ways with founding guitarist Jim Ward just days before the start of the reunion tour and he was replaced by Keeley Davis from Texas outfit Sparta.

Mars Volta ex Cedric: Weed made me a monster