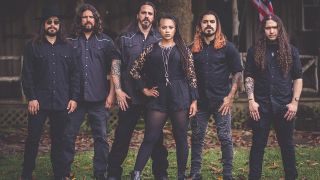 The US prog metal outfit will launch the record on September 4 through Century Media Records – and to mark the announcement, the band have released a video for their new single A Return To The Earth Below.

Speaking about the song, vocalist Cammie Gilbert says: “Within ourselves, just as within our societies there are cycles that need to be broken. Cycles that hold us down, that tear us apart, that give us anguish.

“In the light of this self-reflection is where we will find peace, both inwardly and outwardly.

“A Return To The Earth Below is about that journey. It is about the collision of the heart and mind in struggling to find that internal resolution. We feel that the timing of this single couldn’t be more appropriate, as we have all found ourselves at the crossroads of change.”

The cover artwork for the album was created by Giannis Nakos, with Gilbert saying: “We’d like to thank Giannis for the beautiful artwork that captures not only our imagination, but the depths and darkness of the story the album holds within.

“While there’s plenty more to come, we must be patient for the full album that’s set to release September 4. For now please enjoy A Return To The Earth Below.”

Oceans Of Slumber is now available to pre-order on standard CD, gatefold 2LP/CD and on digital and streaming platforms.

Oceans Of Slumber
1. Soundtrack To My Last Day
2. Pray For Fire
3. A Return To The Earth Below
4. Imperfect Divinity
5.  The Adorned Fathomless Creation
6. To The Sea
7. The Colors of Grace
8. I Mourn These Yellow Leaves
9. September (Those Who Come Before)
10. Total Failure Apparatus
11.The Red Flower
12. Wolf Moon