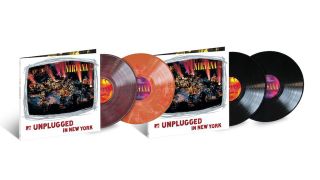 Nirvana have announced they'll celebrate the 25th anniversary of their iconic MTV Unplugged Live In New York album with a reissue on November 1.

The band's memorable live album was originally released on November 1, 1994, and featured reworked versions of well-worn Nirvana classics including Come As You Are, Pennyroyal Tea and Something In The Way, as well as covers of artists including David Bowie (The Man Who Sold The World), Meat Puppets (Plateau, Oh, Me, Lake Of Fire) and Lead Belly (Where Did You Sleep Last Night).

The album has beed noted as a devastating document of an artist struggling with his craft, even after all the success Kurt Cobain had experienced with his band. The album was posthumously released on record as simply Unplugged In New York after Cobain's death. Since then, it has proved to be as defining a part of Nirvana's history as any of their three official studio releases.

The reissued album has been expanded to include five rehearsal performances previously only available on DVD, and will launch as a double LP set with a gatefold jacket and silver foil detail on the front and back cover.

MTV Unplugged In New York is available to pre-order now.