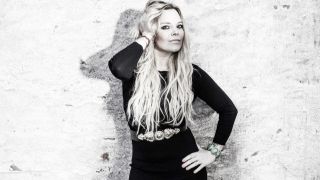 The pair haven’t yet revealed the name of the project, but they will release an album via Frontiers Music Srl in 2017.

Olzon says: “I am so looking forward to sing on an album with Jani and to finally work with Frontiers. I believe it will be a perfect match and I am really happy that Jani and Frontiers asked me to do this with them.”

Olzon sang on Nightwish albums Dark Passion Play and Imaginaerum and left the band in 2012, later claiming she had been fired because she had fallen pregnant.

As well as his work with Sonata Arctica, producer, songwriter and guitarist Liimatainen is a member of Cain’s Offering alongside Stratovarius singer Timo Kotipelto.

He says: “I have always been a big fan of Anette’s voice and when the opportunity to work with her arose, writing and producing an album, it was something I just couldn’t say no to.

“It has been a blast working on the songs already and I can’t wait for the final result. This will be epic.

“The songs will be extremely melodic and to the point.

“My goal has been to write catchy songs with hooks that will haunt your dreams, and I think it’s pretty much mission accomplished. Stay tuned for something special.”