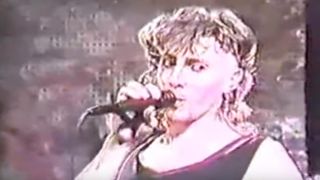 Most bands will have embarrassing footage of early shows tucked away in a vault. These vaults are normally guarded by a vicious dog and a man known only as Ian, because if these clips ever see the light of day, they could cause irreparable damage their career. Some bands have not been so lucky, as grainy footage from their formative years have been dusted off and uploaded onto Youtube for the whole world to see. Prepare to chew your own fist…

The Red Hot Chili Peppers made their TV debut on March 16, 1984 on a show called Thicke of the Night, presented by Robin Thicke’s dad, Alan. The band – Anthony Kiedis, Flea, Jack Sherman and Cliff Martinez – performed Get Up And Jump live at KTTV Studios with all the enthusiasm of a child who is highly sensitive to Red Bull.

Here’s a grainy video clip of Teignmouth trio Muse, competing in a Battle Of The Bands competition at English Riviera Centre in Torquay on November 26, 1994. Third on the bill, the band played five songs they “wrote themselves” and smashed up the equipment at the climax of their set. “They’ve been watching to many Who videos,” sighs the weary emcee, before crowning another band as champions.

Before becoming a TONY award-winning punk, Green Day frontman Billie Joe Armstrong released a single when he was five called Look For Love. Cute. Then he turned into a mullet-sporting, tie-wearing square who sang Christmas songs with all the pizazz of a cruise ship entertainer. It might be us, but 13-year-old Billie Joe is a dead ringer for Joey Lawrence from Blossom. Whoa.

Before Jonathan Davis came along with his dreadlocks, wispy moustache and sparkly Adidas tracksuits, three members of Korn – Munky, Fieldy and then-drummer David Silveria – honed their craft in Bakersfield funk metallers LAPD. The band released one album in 1991, titled Who’s Laughing Now and split shortly after. Feel free to watch with the sound turned down, but look out for the singer’s facial expression around the 2.15 minute mark. He looks like he might be soiling himself.

Before Nine Inch Nails and scoring film soundtracks, Trent Reznor used to dress like a Miami Vice drug dealer and fronted a Cleveland-based new wave band called Exotic Birds. Check out this television interview, notable for the presenter’s wariness about the use of computers in music. It’s amazing to think that Reznor used to own clothes other than those tight black T-shirts.

Here’s a rare clip of Bullet For My Valentine in action, back in the days when they were known as Jeff Killed John. “This sounds like Taproot,” reads one of the kinder comments on YouTube. Who said that woollen tank tops were an acceptable form of clothing. Go on, off to the golf club with you.

Long before Tool, Maynard James Keenan fronted Michigan band, Children of the Anachronistic Dynasty – or C.A.D. for short. Check out this 1987 public access television clip of the band performing Burn About Out, which later formed the basis for Tool’s 1993 single, Sober. Watch Keenan find his Roman-sandalled feet years before he transformed himself into one of rock’s most enigmatic performers. We’re surprised he hasn’t chewed his own fists off with embarrassment.

Here’s a television advert for Halestorm, back in the days when their vocalist was simply known as Liz Hale. With all the warmth of a teen drama villain, she urges the viewers to check out where their next “high-energy” rock show takes place. Quick, before she smashes your face in. Also: keytar.

Here’s Orange County ska punks No Doubt making their television debut in 1990 on a show called The Gig. Watch them cavort around like the whole world was bathed in sunshine, before Gwen Stefani wanders onstage wearing a pair of dungarees last seen on an unemployed clown.

Here’s a young lad called David smashing the shit out of his drums during a stint with Mission Impossible at the Lake Braddock Community Center on July 25, 1985. He went on to join a band in Seattle a few years later. Whatever became of him?