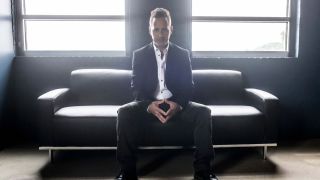 Big Big Train drummer Nick D'Virgilio has released a video for his new single, a cover of the 1959 song Money (That's What I Want), Tamla Motown's first ever hit and a song covered by The Beatles and Flying Lizards.

The song is taken from D'Virgilio's upcoming second solo album, Invisible, which will be released though English Electric Recordings on June 26. You can watch the video in full below.

"I’ve always liked this song, with the original version by Barrett Strong being my favourite," D'Virgilio tells Prog. "I wanted my take on it to be dark and brooding with a cinematic sound, so I came up with a way to build an end with chords that kept climbing until a nice climax, while parts for orchestra were arranged that built a great sound on top. One of my favourite parts of the song is when I’m whispering a bunch of slang terms for money. I sang the whole song like a person that is going a little crazy and that section was a perfect fit."

"Invisible is a rock album with various musical flavours thrown in because the songs were formed with the story in mind," the drummer explains. "A classical prelude that uses various themes from the whole piece sets the stage. From there comes a mellow ballad outlining the story and then it is on to the adventures of the central character. The main thing making this record did for me was to reaffirm my strong belief that we are all here for something. We all have a purpose.”