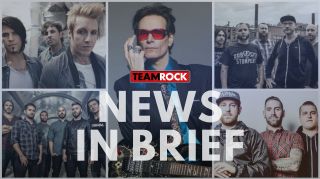 Here is TeamRock’s roundup of all the news snippets from around the world of rock and metal on July 21, 2016. Compiled by our news team at TeamRock HQ. For today’s regular, more in-depth news stories, click the ‘News’ tab in the menu above.

The Ghost Inside guitarist Zach Johnson has revealed he’s not suffering from a bone infection, as previously feared.

Johnson says: “Just spoke with my doctor. My femur is not infected. Such a relief. It means I’ll be having another small surgery on it, but after these last few days nothing can effect my spirit.”

The Ghost Inside this week featured in a video which showed them returning to the stage together for the first time since the crash. They were given the Most Dedicated Fans prize at the Alternative Press Music Awards.

Esperance tells 99.7 The Blitz: “It has got a lot of energy. It’s old-school P-Roach to its truest form, and it’s also got an adventurous side to it. There’s a lot of surprises. There’s a lot of big beats. The message is strong.”

Papa Roach are putting plans in place for a 2017 tour with a mystery big-name co-headliner.

Steve Vai has announced a North American tour to celebrate the 25th anniversary of his album Passion And Warfare.

So far 20 dates have been announced, with more to follow.

Vai says: “The enjoyment that the band is having and the audience response to the shows we are playing in Europe has taken us a bit by surprise.

“There is deep appreciation from us in having the opportunity to honour this record with this tour and we are smiling every moment of it.”

Habitial Line-Stepper is the seventh song from the record to be made available after Prayer Position, The Way The News Goes, Marigold, Flatline, The Price Is Wrong and Remain Indoors.

Select Difficulty is released on July 22 (Friday) via Sumerian Records.

Killswitch Engage have announced a five-date Australia and New Zealand tour for March of next year.

They’ll play one date in New Zealand and four in Australia, with Fallujah in support.

KSE say: “We can’t wait to see you in March on the Incarnate Down Under tour with our friends Fallujah.”