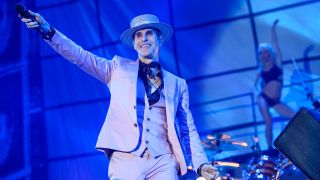 The vocalist recently admitted he is beginning to hate what his Lollapalooza festival has become 25 years after he conceived the event.

He said that he cringes when he thinks of the electronic dance acts that appear on Perry’s, the stage named after him, adding: “I hate EDM. I want to vomit it out of my nostrils. I can’t stand what it did to what I love, which is house music, which was meditative, psychedelic—it took you on a journey.”

Now Perry insists that he loves dance music and has long fought for the inclusion of alternative acts to Lollapalooza – though he admits that there are a number of big-time artists that, in his view, have changed the face of EDM for the worse.

He says: “My comments to the Chicago Tribune were unrestrained and straight from my heart. They were in response to questioning I was asked about EDM.

“Let me state in my own words to you, ‘I love dance music. I fought to bring dance music to Lollapalooza, where there were no acts being booked. They named the area after me because of my passion for dance music and the DJ culture.’

“The critic I spoke with from the Chicago Tribune was very knowledgable about dance music. I agreed with a lot of what he said.”

“At least you all know I’m not a tasteless con artist. I am a musician who learned to be a promoter – who continues to have people’s trust.”

Jane’s Addiction are nearing the end of a brief US tour that includes an appearance at Lollapalooza on July 30.