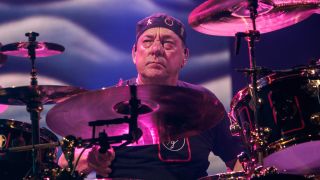 Rush drummer Neil Peart has revealed details of his book about the band’s “farewell” tour.

They performed 35 shows across North America last year, to mark their 40th anniversary, and it’s thought they won’t undertake any more live commitments on the same scale.

Peart, who recently accepted the description of himself as a “retired drummer,” no longer wants to endure the physical strain of three-hour shows, and the emotional strain of being away from his family – although the band remain cautious about stating their position.

Last year Peart reported he was writing a travelogue based on his experience of the tour. Now publishers ECW Press have confirmed that Far And Wide: Bring That Horizon To Me! will be published on September 13.

They say: “35 concerts, 17,000 motorcycle miles, three months, one lifetime. For the band and their fans, R40 was a celebration, and, perhaps, a farewell. But for Neil Peart, each tour is more than just a string of concerts – it’s an opportunity to explore backroads near and far on his BMW motorcycle.

“So if this was to be the last tour and the last great adventure, he decided it would have to be the best one, onstage and off.”

His latest travel book continues his tradition of sharing anecdotes in an “intimate narrative voice that has won the hearts of many readers,” and includes “memories of 50 years of playing drums.”

Far And Wide is available for pre-order now.