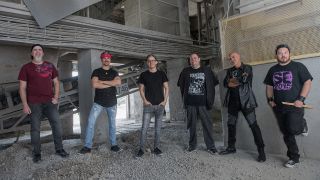 Canadian prog rockers Mystery have announced a run of European tour dates for October. The band have also announced they will release a new live album, Live In Poznan, through Unicorn Digital with OSKAR Records on November 15.

"Just like the name suggest, the album containing a total of 160 Minutes was recorded at the legendary Blue Note Jazz Club in Poznan, Poland," the band tell Prog. "The albums is made of all the songs from the latest album Lies And Butterflies as well as many other great Mystery songs that the fans around the world can enjoy at a Mystery concert.  Once again this new live album is the perfect memorabilia for the fans who came to the 2019 Mystery tour, and for the new fans, demonstrate the power and emotions of a Mystery concert."

Delusion Rain
Come To Me
How Do You Feel?
Something To Believe In
Pride
The Scarlet Eye
The Willow Tree
The Shadow Of The Lake
The Sailor And The Mermaid