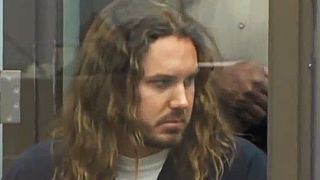 As I Lay Dying frontman Tim Lambesis has been jailed for six years for plotting to have his wife murdered.

His former bandmates were in court to hear the sentence, handed down by Judge Carlos Armour in San Diego Superior Court.

Lambesis was charged last year after attempting to pay an undercover police officer $1000 to kill his estranged wife Meggan. He changed his plea to guilty in February, and faced up to nine years behind bars.

In a statement before sentencing she asked for the maximum possible jail sentence to be doled out, along with a lifetime restraining order. She told how an increasingly “dangerous” Lambesis had texted her the day before his arrest requesting their children’s social security numbers and claimed it showed he was “tying up loose ends.”

She added: “My life felt as fragile as a piece of paper that could float away at any moment.”

The singer’s attorney, Tom Warwick, told the court that Lambesis had changed as a result of steroids given to him my his trainer. But Judge Armour responded that other people use steroids without planning to kill anyone and put the episode down to a “flaw of character.”

An emotional Lambesis admitted he’d never see his family again and told Meggan: “I do feel deep remorse. I want to thank you for your prayers, which proves you still have the heart that you do.”

The sentence includes 48 days’ credit for custody already served and ten years’ protection for Meggan and the children.

He’ll return to court to answer a civil suit raised by her, in which she’s claiming $2m reparation.