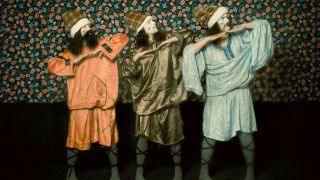 Norwegian prog trio Motorpsycho have announced they will release their latest album, The All Is One, through Rune Grammafon on August 28. The follow-up to 2019's The Crucible, All Is One forms the final part of what the band are calling their "Gullvåg trilogy" along with 2017's The Tower album, and named after cover artist Håkon Gullvåg who has designed all three album covers.

The new album is centred around N.O.X., a 42-minute, five-part piece of epic proportions, inspired by paintings, alchemy and the tarot. The album also features a selection of shorter songs, loosely clocking in between three to 10 minutes.

"It is a long album that features music from two sessions we did last year," the band explain. "The first session included our favourite Stockholmian Norwegian Reine Fiske, and took place in Black Box Studio in France in September. The second, featured two of our favourite Norwegian musicians, Ola Kvernberg (Steamdome) and Lars Horntveth (Jaga Jazzist), and was a brief three day affair at Ocean Sound Studio on the Norwegian west coast in November.

"At the centre of this album is a long five-part piece featuring some of the most radical stuff we’ve done on record in a while, but if the prospect of a 42-minute piece for ballet inspired by paintings, alchemy and the tarot seems too daunting, there is also a handful of loosely related shorter songs to get into. For us this is obviously just different views and tangents of the one thing, but you will all make of it what you will, and hopefully it will all make some sort of sense to you however deep you choose to go."

The current COVID-19 pandemic means the band won't be touring The All Is One for the foreseeable future.

"Since the world as of writing still is only in the middle of the first wave of this pandemic, the rock and roll world is still not revolving like it used to, and no matter how much we wish it was, we could not plan any promotional escapades involving personal appearances in the promotion of this record," they say. "There will be no tour as we know it to celebrate and play the material in the foreseeable future either, but we hope the music world will open before too long and that we can get back to playing to a live audience soon."

The All Is One will be released as a double CVD and double vinyl. The vinyl editions feature a stunning 10 panel foldout sleeve.

Pre-order The All Is One.