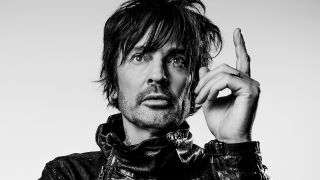 Lee has teamed up with South African rapper Push Push for the song Tops, while Knock Me Down sees the Crue star join forces with up-and-coming rapper Killvein.

Both tracks will feature on Lee’s upcoming solo album Andro, which will launch on October 16 through Better Noise Music, with both videos  directed by Limp Bizkit’s Fred Durst.

Lee has spent the last two years writing and recording the album and it will “challenge virtually everything you thought you knew about him and his musical proclivities.”

Push Push says: “Working with Tommy was an incredible opportunity. He made sure that I was in a comfortable space, free to express myself fully and without limits. The video shoot was a dream come true. I felt empowered to show all my true colours without judgement.

“Honestly, that team could’ve made anyone feel like a star.”

“I was surprised he’d even heard of me but that’s all thanks to our mutual friend, Danny Lohner. Danny showed Tommy my music last year and that’s when Tommy sent me the beat. I recorded half the song in my garage in Sacramento and the other half in his studio in Calabasas.

“I was like a kid in a candy shop in there – he has everything. The video shoot was surreal. Getting to work with both Tommy and Fred Durst was a dream.”

Tommy Lee: Andro
Motley Crue star Tommy Lee will release his new solo album Andro in October. Lee has teamed up with a host of guest artists on the record, including rappers Push Push and Killvein.View Deal