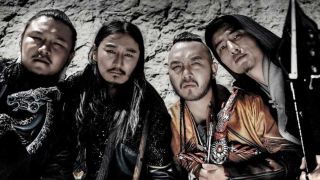 Mongolian band The Hu have released a lyric video for Shoog Shoog, taken from their debut album The Gereg. The album is released on September 13, and pre-orders open today.

Shoog Shoog – like the band's two previous videos, Yuve Yuve Yu and Wolf Totem, which have garnered a combined 28 million plays on YouTube – is a mixture of traditional Mongolian music with Western rock, informed by such bands as Rammstein, System Of A Down and Foo Fighters.

"When we do this, we try to spiritually express this beautiful thing about Mongolian music," says guitarist Temka. "We think we will talk to everyone’s soul though our music."

The Hu describe themselves as "Hunnu rock", playing music inspired by the ancient Mongolian Hunnu empire.

The band were founded in 2016 in Ulaanbaatar, the capital of Mongolia, and comprise TS. Galbadrakh aka Gala (lead throat singer and horsehead fiddle), G. Nyamjantsan aka Jaya (throat singer, woodwind player, jaw harp) and Temuulen aka Temka on Mongolian guitar.

The band have a series of European shows and festival dates lined up throughout June, including a slot at Download Festival on Saturday June 15, with shows in Brighton, Manchester, Glasgow and London already sold out. Tickets are on sale now.