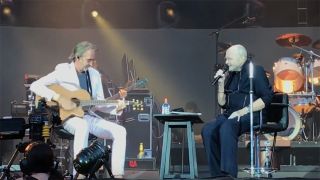 Mike Rutherford and Phil Collins together in Berlin

Fans attending the Phil Collins show at Berlin’s Olympiastadion were in for a treat on Friday night, when the vocalist invited his former Genesis bandmate Mike Rutherford on to the stage.

It was the first time the pair have played together in public since Genesis’ The Turn It On Again Tour in 2007, with Collins and Rutherford teaming up once again to play the 1978 track Follow You Follow Me, which appeared on the album …And Then There Were Three….

Watch video of the performance below.

Back in 2016, Collins reflected on his “special” working relationship with Rutherford and Tony Banks and said he wouldn’t rule out working them again at some point in the future.

He told Prog: “Doing the book Not Dead Yet, I was reminded just what good friends we are. What I will say is that I consider what we had was pretty special.

Collins is currently on the European leg on his Still Not Dead Yet Live! tour, with the next stop scheduled for Bergen later today (June 10).

Genesis are also the cover stars of the new issue of Prog magazine, which is on sale now. It features the top 40 tracks by the band, as chosen by readers, and includes the stories behind the songs.