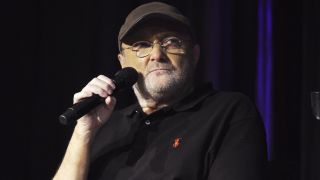 Phil Collins says he ‘wouldn’t rule out’ working with former Genesis bandmates Mike Rutherford and Tony Banks in the future.

The drummer-turned-singer previously said that writing his autobiography Not Dead Yet made him re-examine his time with the band. Now he recalls the spontaneous creativity he had with guitarist Rutherford and keyboardist Banks during their studio sessions.

He tells Prog: “Doing the book, I was reminded just what good friends we are. What I will say is that I consider what we had was pretty special.

Speculation about a Genesis reunion has increased since Collins came out of retirement – though he’d remained cautious over talk of a comeback, saying: “I just don’t want to suddenly take the brake off, start flying off and doing things. I want to do things carefully and think about the consequences.”

Collins will perform his biggest solo show ever at British Summer Time festival in Hyde Park in 2017, following a run of sold-out tour dates in London, France and Germany.

The Phil Collins Quiz: how well do you know the former Genesis man?