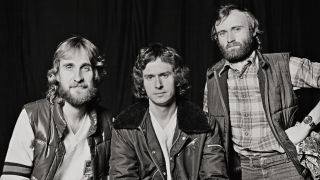 And then there were three: (l-r) Mike Rutherford, Tony Banks and Phil Collins

By the start of 1978, the ‘classic’ line-up of Genesis had lost two members – Peter Gabriel left in 1975 after The Lamb Lies Down On Broadway, Steve Hackett quit after 1977’s Wind & Wuthering – but they could take some comfort in the knowledge that the band now had a wider fan base. And that was largely due to one song: the pop-savvy Follow You Follow Me, with its simple betrothal of love and sing‑song chorus.

There had been songs with a more accessible flavour on previous Genesis albums, such as Ripples from 1976’s A Trick Of The Tail, and Your Own Special Way from Wind & Wuthering. But for follow-up And Then There Were Three, and specifically the one that became its first single, Phil Collins, Tony Banks and Mike Rutherford set out with the express intention to write something that would attract a broader range of fans, specifically more females. They wanted to help shift the perception that Genesis only made long, complex, instrumentally elaborate rock for hirsute proggers allergic to melodic succinctness.

“Until Follow You Follow Me our audience was very strongly male,” Mike Rutherford shrugs. “After it, all the guys were able to say to their girlfriends: ‘Here’s that song you like.’ So they’d come along [to gigs], and of course they’d enjoy the whole evening. It changed our audience ratio and we got more women after that.”

“Initially,” Rutherford explains, “it was just a riff I had. Tony then put some chords behind it, and a couple of really unusual changes. In those days we’d just work on bits and put them all together… It could have been part of a long song.

“We were never really good at writing short songs,” he says, despite having grown up “with The Beatles, The Kinks and The Small Faces as inspiration”.

“We were an albums band. And it’s quite an art to write a song that works in three and a half or four minutes. But this one had a natural life as a short song. It was a simple idea, musically.”

The unusual guitar sound at the start was done with an MXR flanger effects pedal. “Trevor Horn once said the intro is the most important part of the song,” Rutherford says. “I know what he means.”

Once that guitar figure was in place, Rutherford knocked out the lyrics in 10 minutes flat.

“Not quite ten minutes,” he says, bristling slightly. “It was the first time I’d written such simple words. They were inspired by my wife [Angie]. We were away a lot on tour, and I wasn’t seeing her an awful lot, as happens with bands in the early days. So I thought of her. It was such a simple sentiment, unlike, you know, all our other words at the time. And so you write it from the heart, quickly.

“I thought, ‘God, this can’t be any good,’” he adds, laughing. “Normally lyrics take agonising over and developing. But then you look at [FYFM] and realise that’s the charm.”

And yet, for all its engaging qualities, the song was far from sappy. “It’s one of those songs you hear now on the radio and for some reason it’s not sugary,” Rutherford offers. “It could so easily have been a little bit soppy. It’s the way Phil sang it; the combination of everything. It sounds convincing.”

Follow You Follow Me was recorded at Relight Studios in the Netherlands. “What we used to do was go away for three or four weeks, just the band, and immerse ourselves in the recording process,” Rutherford recalls. “When you go away somewhere you definitely get in the zone.”

Recording for their first album without Steve Hackett since 1971’s Nursery Cryme, did they miss their former guitarist in the studio?

“Well, I wasn’t a lead guitarist, and I remember discussing getting in another guitarist, what with Steve’s fluidity and style, but I think we felt at that stage that we’d been together quite a long time as the three of us, and to bring a new person in, to make them understand the way we worked, to make them fit, was quite a big ask. So we thought we’d just try without it and see.”

Their first UK Top 10 hit, Follow You Follow Me also marked their entry into the US charts.

“Out of the blue we had our first hit single. In America we were a popular live band with a cult following, but we struggled at radio. Then suddenly this song came out and people liked it and bought the album. It was nice to have a little bit more recognition from people who didn’t like us before. People were drawn in by it.”

It was the first real sign of Genesis’s pop sensibility, one that would help them become, over the next decade or so, one of the biggest bands on the planet. But its very commercial potency proved irksome for some diehard fans.

“I know it sounds awful to say, but I never really worry about the fans,” Rutherford says. “That’s the worst thing you can do, because then you start trying to work out your direction to satisfy them. I think it’s really important that you try and satisfy yourself, wherever it takes you. That way your inspiration is never controlled by what you think you should be doing. In the long term, for any fan who likes music, it produces better results.”

Better, and more varied. It’s extraordinary that one band could accommodate everything from Supper’s Ready to… well, Follow You Follow Me.

“Yes,” he says, as though he’s just been made aware of Genesis’s eclecticism for the first time. “I rather like that.”