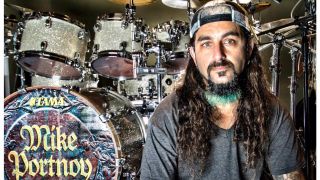 Mike Portnoy admits he misses the control he had in Dream Theater.

The drummer was the mastermind behind much of their work for 25 years before he left in 2010. Though he’s always maintained it was the right decision, he says the collective songwriting process for his other projects The Winery Dogs and Flying Colors can be “incredibly frustrating.”

He tells Noisefull: “To be honest, I miss being the captain of a ship. Because after I left Dream Theater, I’ve never been the clear leader.

“Everything I’ve done like Flying Colors, The Winery Dogs, they’re more collaborative roles – and to be honest, I do miss the amount of control that I had in Dream Theater. I was able to make 90% of the decisions and direction in Dream Theater on my own and didn’t really discuss everything and those guys kind of trusted me with that. So, I do kind of miss that.”

He continues: “One of the things about being in a band is that sometimes the collaborative process can be great, but it’s also incredibly frustrating at times.

“Having to go through 100 emails on every single decision sometimes, you pull your hair out of your head and I miss the days that I had in Dream Theater, where I ran the show. But honestly it’s okay, because that was then and this is now.”

Last month Portnoy admitted that he feared the double-album he made with The Neal Morse Band, The Similitude Of A Dream, would be compared to Dream Theater’s latest two-disc work, The Astonishing.

The Neal Morse Band head out on the road from January in support of the album.