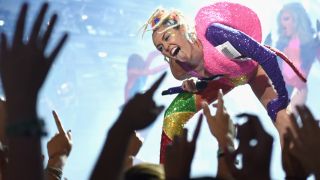 An academic study of Black Sabbath lyrics has concluded that rock and metal may not glorify drug use as much as popular opinion would suggest.

While rock and metal has, rightly or wrongly, long been associated with drug culture, the study by the National Institute On Drug Abuse has found that the genre may not glorify drugs as often as pop, hip-hop and other genres.

Pop acts such as The Weekend, Lana Del Ray, Sia, Tove Lo and Selena Gomez have referenced drugs in their lyrics, while Miley Cyrus sings about taking ecstasy at a party in her hit We Can’t Stop.

Dr Kevin Conway, an expert in drug use trends and patterns, worked with Dr Patrick McGrain of the Department Of Criminal Justice at Gwynedd Mercy University on the study. They analysed 156 Black Sabbath songs across 19 albums recorded from 1970 to 2013.

And their research found that only 13% of Sabbath songs referenced drugs and that 60% of those references were negative about substance abuse.

In their conclusion, Drs Conway and McGrain say: “Contrary to the notion that heavy metal music glorifies or encourages substance use, Black Sabbath’s lyrics as a whole weave a cautionary tale of how persistent substance use can hijack free will, become the dominant focus of the affected individual, and produce myriad forms of human misery.

“The insidiousness of chronic substance use depicted by the lyrics mirrors findings from natural-history studies of individuals with substance use disorders and aligns with neurobiological heuristics of addiction.”

All but one of the songs in the study feature Ozzy Osbourne and bassist Geezer Butler, who is the band’s chief lyricist. Both have had their struggles with drug abuse down the years.

By comparison, research carried out in 2014 found that rap and hip-hop lyrics have consistently glorified drugs over the years, with mentions of pharmaceutical drugs rising dramatically in recent years.

In 2009, The American Academy Of Pediatrics commented on research into the effect of pop lyrics on children, saying: “The effect that popular music has on children’s and adolescents’ behaviour and emotions is of paramount concern.

“Lyrics have become more explicit in their references to drugs, sex, and violence over the years, particularly in certain genres.”