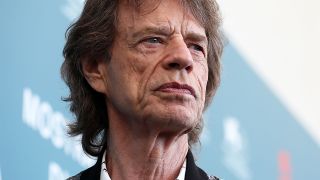 Mick Jagger’s four solo albums are to be reissued next month.

All of the Rolling Stones' frontman's records have been remastered at half-speed from analogue tape transfers by engineer Miles Showell at London's Abbey Road Studios.

She’s The Boss was originally recorded at Compass Point in the Bahamas, and was produced by Jagger, Bill Laswell and Nile Rodgers and featured special guests Jeff Beck, Pete Townshend and Herbie Hancock.

Primitive Cool was laid down between Barbados and the Netherlands and featured the singles Let’s Work and Party Doll, while Wandering Spirit saw Jagger work with acclaimed producer Rick Rubin.

Goddess In The Doorway saw Jagger once again team up with Kravitz and Townshend, with U2’s Bono also appearing on the track Joy.

All four albums are now available to pre-order.

Mick Jagger: She’s The Boss
Mick Jagger’s debut solo album She’s The Boss arrived in early 1985 and it brought success for the Stones frontman, with the record hitting no.6 in the UK charts.View Deal

Mick Jagger: Primitive Cool
Jagger followed his debut offering with 1987's Primitive Cool and although it didn't quite achieve the chart success of its predecessor, it did include the singles Let’s Work and Party Doll. View Deal

Mick Jagger: Wandering Spirit
1993’s Wandering Spirit saw the Rolling Stones frontman team up with producer Rick Rubin. It was a successful partnership which saw the album climbing the charts in the UK and US.View Deal