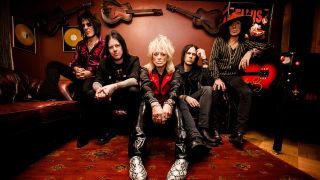 Michael Monroe has been confirmed as a headliner for next year’s Call Of The Wild festival in the UK.

The event will take place between May 29 and May 31, 2020, at the Lincolnshire Showground, Grange de Lings, Lincoln, with artists including Phil Campbell And The Bastard Sons, Massive Wagons, The Cruel Intentions, Lawnmower Deth, Raging Speedhorn and Glen Matlock & the Tough Cookies previously confirmed.

Now, the former Hanoi Rocks frontman will take to the stage in support of his new studio album One Man Gang which was launched last month through Silver Lining Music.

Monroe says: “Can’t wait to see you all at Call Of The Wild and play at this great festival.”

Festival director Raz White adds: “Life doesn’t get much better than when you confirm Michael Monroe to headline the festival you’ve spent a life dreaming about building.

“I became a huge Hanoi Rocks fan back when I was 14 and started to cross over from punk to rock bands. The image, energy and songs just resonated with me.

“In my humble opinion, easily the greatest frontman to strut the stage. So, this is a huge honour for me and the whole team. We can guarantee this show will be absolutely spectacular!”

Aaron Buchanan And The Cult Classics have been forced to withdraw from the festival due to the fact that Buchanan is emigrating to Australia in 2020, with Dead Girls Academy stepping in.

For further details and tickets, visit the Call Of The Wild website.