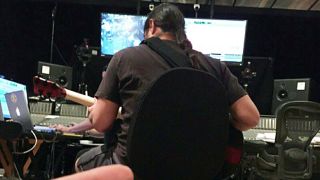 Metallica have posted a teaser picture that finally proves they’re working on the follow-up to 2008’s Death Magnetic.

Ulrich recently revealed the writing process for the long-awaited project began in 2013.

Last month, Trujillo said he was excited by the songwriting they had completed to date, adding: “We’re just blueprinting everything right now. There are a lot of ideas, a lot of song bodies. You’ve got to go through the process. I’m really happy with what’s happening instrumentally. So let’s see how that journey continues.”

Former producer Bob Rock said of what will be Metallica’s tenth album: “I think they’ve got a landmark record in them – and it’s probably brewing right now.”

The band will be honored by the NHL’s San Jose Sharks as they host Metallica Night later this month. They headline the Reading and Leeds festivals in August.