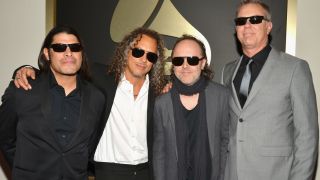 Metallica are joining forces with ice hockey’s San Jose Sharks for a metal-themed night in January.

The Sharks take on Stanley Cup champions the Los Angeles Kings on January 21 – and the band will be there for Metallica Night, where they’ll play, hit the ice for the ceremonial puck drop and take part in activities between periods at the SAP Center.

The band say in a statement: “We have been long supporters of the Sharks going back to the mid-90s when the team moved permanently to San Jose and over the years we’ve made many treks down to the Shark Tank.

“It’s actually pretty fitting that we finally connect with the team for a night of metal and hockey and we want you to come along and partake of the festivities with us. We’ll be on hand for the first strains of Seek & Destroy, kick off the game with the puck drop and partake in some in some of the intermission fun and games that Sharks fans know and love.”

Tickets go on sale tomorrow (December 17) and sales will include a specially designed T-shirt to mark the event. Proceeds will go to green charity the Sierra Club.

The band have also been invited to attend the third annual Metallica Night with baseball team the San Francisco Giants next May at AT&T Park.

Metallica are currently working on the follow-up to 2008’s Death Magnetic, with bassist Robert Trujillo recently saying the group are taking their time to “nurture” the new tracks. They’ve also been confirmed as the headlining act at Reading & Leeds 2015.