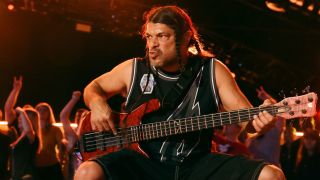 Metallica’s Robert Trujillo says the band are taking their time to “nurture” songs on their upcoming album.

The bassist says he’s excited by the material that’s being put together for the follow-up to 2008’s Death Magnetic, but adds that they won’t be rushed.

Trujillo tells Rock Cellar: “We’re just blueprinting everything right now. There are a lot of ideas, a lot of song bodies; you gotta go through the process. For me personally, I’m really excited about what we’ve been able to jam out.

“I don’t like to make predictions, but I’d like to think — at least for me — that I’m really happy with what’s happening instrumentally. So let’s see how that journey continues.

“Writing a Metallica song is a journey and a process, and it takes time. But that’s what’s special about it. Metallica likes to nurture a song, nurture an arrangement.”

He also talks about the band’s energy in the rehearsal studio, describing his bandmates as being like “teenagers” who occasionally run through a Black Sabbath or King Diamond cover version.

He says: “One of the things that I’ve noticed since I’ve been in the band is that as players, Lars, James and Kirk truly enjoy making music and performing. When they put their instruments on, in a lot of ways they become teenagers again.

“The impromptu jams — they might be King Diamond or Mercyful Fate, Diamond Head, or Black Sabbath – there’s always this excitement that runs through their veins when they put the instruments on, and that carries over into original ideas too.”

Trujillo is running a crowdfunding appeal for his upcoming film about iconic bassist Jaco Pastorius.