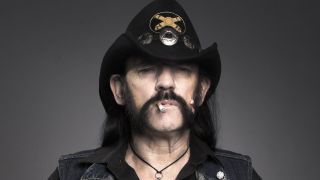 The British band have been eligible since 2002 but remain unelected, alongside several notable artists who might have been expected to have been bestowed the honour.

But the Metallica man, who entered the Rock Hall in 2009, believes there’s an added urgency in Lemmy’s case.

Hetfield tells 95.5 KLOS: “There are so many great bands that haven’t been acknowledged – and if they do or don’t, it’s not up to me.

“It’s just a nod, a tip of the cap. What does it really mean to be in there? I don’t know. But to some of these bands it might mean the world.

“With the passing of Lemmy, it’s really, really important for me to see Motorhead acknowledged in that – because there’s no more rock’n’roll person on this planet than Lemmy.”

Metallica’s upcoming album Hardwired… To Self-Destruct includes a tribute to Lemmy in the form of a track called Murder One. “It was the name of his amplifier on stage,” says Hetfield. “I loved being murdered every night by that thing, man. He was such an inspiration to us as a band. There’s certainly no way we’d be around there was no Motorhead.

“And, you know, to see your idol, your immortal one, actually be mortal, it hit us pretty hard. So I felt it makes sense to acknowledge how much he’s meant in our lives.”

In 2012 Lemmy said he’d fallen out with Hall Of Fame bosses over the loss of a jacket, explaining: “They had this presentation thing and they said, could they borrow a pair of boots and a bass and my Ace Of Spades tour jacket, so I lent it to them.

“They said they lost it. A likely story – look me in the eye and tell me again. One of their girlfriends is wearing it.”

Asked if induction would be an honour, Lemmy replied: “What honour? They owe me a jacket before I’ll even speak to them.”

Meanwhile, Hetfield reports that Metallica aim to continue their WorldWired tour for some time to come. “We’re booking out the next couple of years, where we’re going to go, how we’re going to get there and what it’s going to look like,” he says.

“We’re still trying to figure out what makes most sense for us. It’s changed for us – you’re getting older and you want to still do what you’re doing, but it takes a little more time to do it.”

He adds: “We’re not out there killing ourselves on a three-year, five-shows-a-week tour. We’re working out how it needs to be now, age-appropriately, so my body can survive it.”

Hardwired… To Self-Destruct is released on November 18. Metallica are the cover stars of the latest edition of Metal Hammer, on sale now.