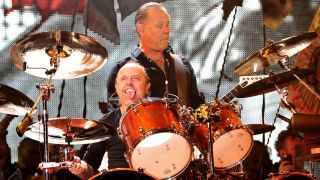 Metallica’s controversial headline appearance at Glastonbury is in the running to be voted the best of 2014.

The thrash giants last night won the Film Of The Year Award for Through The Never at the Classic Rock Roll Of Honour gala night in Los Angeles.

And they could add a UK Festival Award gong next month if they top the shortlist of 12, after public polling closed last month with more than 700,000 people registering their preferences.

They’re up against Linkin Park (Download), The Prodigy (Sonisphere) and the Red Hot Chili Peppers (Isle Of Wight) and others.

Metallica became the first heavy band to close the Pyramid Stage at Worthy Farm in June. The announcement led to 80% of those who had bought tickets wanting to sell them, an online petition to have organiser Michael Eavis change his mind, and a backlash from some bands who claimed James Hetfield and co shouldn’t be there.

Drummer Lars Ulrich told TeamRock: “Glastonbury is like the Holy Grail in England, and we’re respectful to that. But if somebody sits there and talks about petitions or what some other guy says, there’s a point that it just becomes ridiculous.”

But the set has opened the door to future appearances by big-name rock acts, with AC/DC believed to be in the running for 2015.

Ulrich presented a Music Industry Trust Award to Eavis earlier this week, calling him “the greatest rock star in England.”

Biffy Clyro – T In The Park