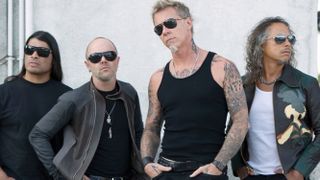 Metallica have released a video where they look back at the release of their 1986 album Master Of Puppets.

It’s been issued to mark the upcoming release of Metallica: Back To The Front, author Matt Taylor’s book celebrating the band’s classic third album and accompanying tour, which saw the group winning over new fans and suffering the tragic loss of bassist Cliff Burton in a bus accident in Sweden.

Vocalist and guitarist James Hetfield says: “I think Master Of Puppets signifies for a lot of people – and it does for me as well – the pinnacle of the Cliff Burton era with Metallica, obviously, but also it was still rebellious. Back then it was just the four of us in a van out to conquer the world.”

Drummer Lars Ulrich adds: “Master Of Puppets seemed to be the culmination of the journey that had started four or five years before with James and I getting together, writing some songs, Kirk and Cliff joining at separate times within six months, and that lineup settling.”

Guitarist Kirk Hammett reports the album’s popularity shows no signs of abating, even 30 years after it was released.

He continues: “I really feel with the music on Master Of Puppets, we had to pull out of a deep place. A lot of it is so emotional – from the music to the lyrics and guitar solos. Even the arrangements – it’ so dramatic.”

For Metallica: Back To The Front, Taylor interviewed key players including managers Cliff Burnstein and Peter Mensch, producer Flemming Rasmussen, mixer Michael Wagener, along with members of the road crew and tour mates Anthrax and Armored Saint.

It’s set for release on September 13 and is available for pre-order from the band’s website.

Metallica are gearing up for the launch of their 10th album Hardwired… To Self Destruct on November 18 via their Blackened Records label. Earlier this month, they issued a stream of the title track and teased Moth Into Flame.