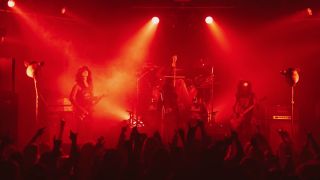 A still from the ManUNkind video

Mayhem guitarist Morten Bergeton Iversen says his life “got weird” this week when he saw the video for Metallica track ManUNkind.

The Jonas Akerlund-directed promo features a black metal band onstage who bear an uncanny resemblance to Mayhem, complete with similar stage make-up, pigs’ heads on spikes and the lead singer cutting himself with a hunting knife.

And after seeing the video, Iversen, aka Teloch, posted a message on Facebook to voice his surprise.

He says: “My life just got weird, Metallica copying, not only the Mayhem logo and the old Mayhem characters in their latest video, but they copied an old gig as well.”

Akerlund, who was a member of Swedish black metal pioneers Bathory in the early 80s, is known for directing videos which often mock movie trailer and films.

Mayhem will head out on a European tour in March where they’ll perform their debut album De Mysteriis Dom Sathanas in full.

He tells Guitar World: “A lot of this record is sort of mutant boogie-woogie from the depths of hell with oil and gravel all over it!

“I’d say the riffs are overall more simple and groove-oriented. It has a high energy, mischievous feel. Whenever I play Hardwired and we go into that second riff, I love it because it sounds so reckless, but we’re completely in control.”

Hardwired… To Self-Destruct is out now, with Metallica this week releasing videos for all 12 album tracks, along with a promo for 2014 single Lords Of Summer.