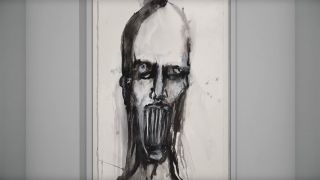 Marilyn Manson has released his cover of The Doors classic 1967 track The End.

The vocalist, who played the original song over the PA at the end of his North American summer shows with Rob Zombie, has also revealed a video for the Shooter Jennings-produced track, with the visuals created by Zev Deans and based on an original watercolour painting by Manson.

The End is also available to purchase, while a limited edition picture disc is now available to pre-order. Only 2000 will be released and it'll be available from March 6, 2020.

The End is the second cover released by Manson in recent months. In October, he launched a Tim Mattia-directed video for his take on American folk song God’s Gonna Cut You Down, which first appeared on the soundtrack to the 2017 film 24 Hours To Live.

In July, Manson spoke about his upcoming studio album which will be the follow-up to 2017’s Heaven Upside Down.

And in September, it was revealed that Manson had landed a role in the third season of American Gods, which will will premiere on the Starz network in the US in 2020 and an internationally on Amazon Prime.