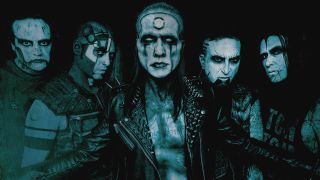 Wednesday 13 has released his new single titled Bring Your Own Blood.

It's the latest material to be released from new album Necrophaze, which will arrive on September 27 through Nuclear Blast Records. To mark the new single, a visualiser video for the track Bring Your Own Blood also been released today.

“BYOB is one of my favorites off the new album. It’s what I like to call the ‘party scene’ in the audio-horror movie that is Necrophaze," says Wednesday 13. "Like in a lot of my favourite 80s horror films there was a party scene, and usually a rock ‘n’ roll track to back it up... this is that track.

"This is the fun song on the album before everything gets dark and weird.”