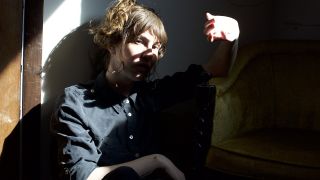 It’s the first material from her upcoming new album On Dark Horses, which will launch on September 14 via Sargent House.

The record will be Rundle’s first since 2016’s Marked For Death and will be backed by a massive tour, taking in dates across North America, the UK and Europe.

A statement on the record reads: “Written during rare and fleeting moments of calm during the past two years’ relentless touring, Rundle’s new batch of songs that comprise On Dark Horses vibrate with restlessness and forward motion.

“Prodding and preening the wounds unmasked in Marked For Death, Rundle’s third album for Sargent House brings cinematic instrumentals to her sprawling narratives.

“These eight new tracks capture the evolution of Rundle as an artist. Vestigial traces of 2011's Electric Guitar: One’s savvy guitar work, the heart-on-sleeve intensity of 2014’s Some Heavy Ocean and the high-stakes torch songs of Marked For Death can all be heard in equal and harmonious accord.”

Rundle is joined by a variety of guest musicians on the the album, including Dylan Nadon and Evan Patterson and Todd Cook from Jaye Jayle, who Rundle worked with on last year’s split EP The Time Between Us.