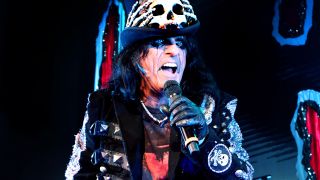 Alice Cooper has shared his cover of the Bob Seger track East Side Story.

Seger and his band The Last Heard originally released the single in 1966, with Cooper’s version appearing on his Breadcrumbs EP, which will launch this coming Friday (September 13) through earMusic.

Cooper’s tribute to the “garage rock heroes from his hometown Detroit city” will also feature covers of Suzi Quatro’s Your Mamma Won’t Like Me, MC5’s Sister Anne and Mitch Ryder And The Detroit Wheels track Devil With A Blue Dress On.

A new track titled Go Man Go will also feature, along with a remake of Detroit City, which originally appeared on The Eyes Of Alice Cooper back in 2003. The new version is titled Detroit City 2020.

Speaking with Billboard earlier this year, Cooper revealed he would be recording the new material with producer Bob Ezrin and a number of Detroit musicians including drummer Johnny "Bee" Badanjek – with a full-length studio album to follow in 2020.

“I feel like if we mine around with all Detroit players, we're gonna find that sound.”

Breadcrumbs will be released on digital and streaming platforms and on 10-inch vinyl limited to 20,000 pressings. Each vinyl package will be individually numbered.

Cooper will return to the UK in October with special guests The Stranglers and MC50 featuring Wayne Kramer.