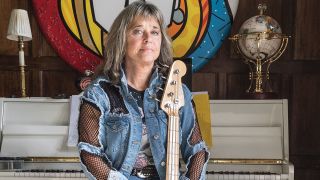 It’s one of the defining images of the glam era: Suzi Quatro resplendent in a black leather catsuit, as provocative as it’s androgynous, locked into a pounding, groin-located groove, manhandling a vintage Fender bass of almost identical height; out front, sassy, assertive, with a burly Detroit street gang at her back.

Before Suzi, rock’n’roll women were expected to be submissive, subordinate, subservient. After Suzi, all the girls wanted to be her and all the boys wanted her to be their boss. A succession of perfect Chinnichap hoodlum hit singles – Can The Can, 48 Crash, Daytona Demon, Devil Gate Drive – sealed the Quatro legend, while her feral snarl and uncompromising stance saw a succession of future legends (Jett, Hynde et al) first relate, then emulate. Still gigging, still inspiring, and recently delivering a stunning album alongside The Sweet’s Andy Scott and Slade’s Don Powell as QSP, no one defines rock’n’roll quite like Suzi Q.

Legend has it that you discovered and became captivated by Elvis when you were just seven. It seems you identified your calling at an early age and never wavered.

It’s completely true. I remember it happening. And it’s crazy for that to happen to somebody at the age of six, going into my seventh birthday. The whole family were watching The Ed Sullivan Show, and Elvis came out and he started to do Don’t Be Cruel. Now, my one elder sister was nine years older than me, so she was just the right age and she started to scream. And I looked at her like: “What are you doing?” Because I’m only six. Why are you screaming? Then I looked at the TV and I went into the set, really into it, connected with him, and in my brain it said: “I’m going to do that.” Just, bang! It never occurred to me that he was a guy and I was a girl.

You were at an age where gender wasn’t an issue.

Yeah, probably. But because that happened so young, I never did gender at all. I was more of a tomboy.

Your father’s support was clearly a key factor in your dream becoming a reality. Not only did you take piano lessons, but he gave you a Fender Precision bass when you were just fourteen, an instrument wholly synonymous with rock’n’roll.

When I talk to other musicians and they start telling me the fights they had, the struggles, I guess I didn’t have that. My dad really pushed all of his four daughters to be just who they are, and he had the two waves of kids – he called them the two generations. There was the nine-year-old and the seven-year-old, sister and brother, then there was a gap, then there was my younger sister and my baby sister, so it was like two different things. And he certainly brought up the last three girls gender-free.

He gave me my first bass to start with, my Fender Precision 1957. I mean, what a guitar to get for your first one. And I didn’t even know it was a big bass. I had no conception of what a big bass or a small bass was. That’s what he gave me and that’s what I learned. So I learnt the hardest bass with my small hands, not knowing that there was another alternative – “So this is the bass, I’ll play this.”

It does. I have been quoted as saying that. I said hits you between the legs but, same thing. It’s a very organic instrument.

How easy was it to get gigs as an all-girl band [The Pleasure Seekers] in the mid-sixties?

It was easy to get gigs. We were different. There weren’t that many all-girl bands back then, and there definitely aren’t even that many now. You get the odd girls in bands now that you never used to have; it seems to be a real big thing to get a female bass player now.

They didn’t hire me back then, I had to play in my own band. We were working more than the male bands because we were girls. So they hired us quicker. The guys used to be mad at us: “God, you guys are always working.” Well, sure, we’re different. So we had a lot of experience on the road, which stood me in good stead later on.

Was there ever any discussion that you might possibly front an all-female band when you moved to the UK?

I wasn’t against that. In fact when I put out the call in Melody Maker that I was holding auditions it didn’t say male or female, it just said please come down if you’re interested. Not one female showed up. I wouldn’t have been against it, but none showed up.

The leather catsuit was a genius move. Catwoman and Emma Peel had already brought similar imagery into the broader media, but in female pop star terms, when Cilla, Lulu and their ilk were at the peak of their exaggerated pinafore dress femininity, this was a revolutionary, taboo-busting decision. So how did that come about?

Can The Can was recorded, and Mickie [Most] heard it and he called me into the office for a big meeting – just me – and he said to me: “Suzi, after all this time you’ve got a number one. I can feel it.” Mickie knew his hits, nobody better than him. This was a very serious discussion, and another pivotal moment in my life. He said: “Now we need a real photo session. What are your thoughts?’ And I said: “Leather.” I’ll always remember it. And he said: “No.” I said: “Leather, Mickie.” He said: “Suzi, it’s so old fashioned.” I said: “No.” He said: “It’s been done.” “Not by me.” So then he said okay. I said great. And then he stopped a minute, and this wonderful moment in history. He said: “What about a jump-suit?” And I said great idea.

I honestly didn’t know until I saw the photos that it was sexy. I thought: “Sensible, logical, I’m a real energetic performer, I don’t have to worry about anything.” And then when I saw those pictures I went: “Oh.” I get red in the face now because maybe that’s why it worked, because it was so sexy. There was an innocence about it. It wasn’t like I was trying to be sexual, it was just there, wasn’t it?

Yes. It wasn’t contrived, and because of that you could get away with it.

I got away with it. It wasn’t a threat to the women. I became a pin-up for the guys and a hero to the women, so I kind of cornered the whole market just by being me. Isn’t that great? God, if you’re going to do anything, be who you are.

How did you feel when in 2013 you received the Woman of Valor Award from Musicians for Equal Opportunities for Women, in recognition of your influence on generations of female musicians?

It’s nice. When you do those awards they are humbling. You’ve gotta be honest. When I went to Detroit and got the Rock And Roll Hall Of Fame and the lifetime achievement in my home town, I’m like, “Woah.” And they give you these big speeches and everything. I try not to dwell on it, because I am a very grounded girl, but I do have my moments of being very proud. You can’t take it too serious, and then you get all blown up with yourself. I try not to do that.

You undoubtedly paved the way for independent women in rock. Do you think anything has changed fundamentally, and is it any easier for women now?

It’s a two-edged answer. It’s not so much of an oddity now when you see a girl musician, so that way it’s easier. But to be quite honest I haven’t seen a lot of people walk my path, even after all these years, which can only make me say it’s not an easy path to walk.

That’s the female musician element, but then you have the other element, the purely female element. I am a little bit disheartened at the level of soft porn that it’s gotten to. I put my neck on the line a long time ago, and all I can say is if you think that because you’ve chosen as a female to dress in virtually nothing that you’re in control of it, you’re not. Because all it is is using the male attitude of what they see you as, and by putting it out of your own mouth you’re just playing the game. You’re not in control of that. It goes beyond you and it takes away from your talent. I say: “Woman, get dressed!” Really, how far can you go?

Well, it’s an image based on submission, and Suzi Quatro was never seen to be submissive. You were never the victim in any given situation, and in the band you were always the dominant force.

Absolutely. And I have to swear now, because it’s the only words that can describe what I call my inner character, where I am strong: don’t fuck with me. That’s all, you know? Always treat me as a lady. Which is a funny thing to say directly afterwards. I can be a tomboy and I can take your dirty jokes to a degree, but there’s the line and don’t cross it. But I don’t suffer fools gladly. I’m a pretty tough character there, and I don’t like bullshit.

It’s a measure of your success that back in 1973 you enjoyed the rare accolade of being a Penthouse centrefold so sought after that you were allowed to keep your clothes on.

Isn’t that a Suzi thing to do? Sure, I’ll be in Penthouse… clothed. I said years ago, when I did that, I don’t have to take my clothes off to be sexy. And neither does anybody. If you’re sexy you’re sexy. You can be sexy in a potato sack. It’s something inside.

Toughness can be sexy, being in control can be sexy, but to take that attitude with Penthouse in 1973, we’re talking about a time and place where feminism was just a word.

What did I think I was like? [laughs] What a fiesty little bitch I was, eh? I had a very strong sense of self, I guess, always.

Paying tribute to the founding mothers of rock'n'roll